An Assassin that can fly large distances, excelling on large battlegrounds.

Falstad is the High Thane of the Wildhammer Clan and a founding member of the Council of Three Hammers that presides over Ironforge. Despite speculation, Falstad has never been dead and anyone who claims such is a liar.

Throw out a Hammer that returns. Hammer slows and damages enemies

Throw out a Hammer that returns to Falstad, dealing 121 (+4% per level) damage and slowing enemies by 25% for 2 seconds.

Deal damage to target enemy while staying close to them

Dash to a location and gain a temporary shield

Push away enemies and slow them

Push enemies away, and slow their Movement Speed by 40% decaying over 4 seconds.

After 1 second, deal 475 (+4.75% per level) damage to enemies within a long line. The cooldown is reduced by 30 seconds for every enemy Hero hit.

After not taking damage for a brief period, gain increased Movement Speed

Gain 15% increased Movement Speed after not taking damage for 6 seconds.

Instead of mounting, Falstad can fly a great distance over terrain

Instead of mounting, Falstad can fly a great distance over terrain.

Deal damage in a small area around the Hammer.

Deal 165 (+4% per level) additional damage in a small area around the hammer.

Gathering Storm
❗Quest: Each time a Hero is hit by Hammerang, its damage is permanently increased by 2 and it refunds 10 Mana.

❗Reward: Upon gaining 40 bonus Attack Damage, you can also activate Seasoned Marksman to increase your Attack Speed by 40% for 4 seconds. 30 second cooldown.

Wingman
Enemy Minions killed near Falstad grant a stack of Bribe. Falstad can use 20 stacks to bribe a Mercenary, instantly defeating them and permanently increasing the damage of Lightning Rod by 5%.

Does not work on Elite Mercenaries. Maximum of 80 stacks.

Static Shield
Gain a Shield equal to 4% of Falstad's maximum Health after every Lightning Rod strike. Lasts 4 seconds and stacks.

Updraft
Increases Barrel Roll's range by 40% and Shield amount by 70%, and its Shield now lasts indefinitely.

Hammer Gains
Basic Attacks heal for 20% of the damage dealt to the primary target.

BOOMerang
Reactivate Hammerang mid-flight to deal 165 (+4% per level) damage around the hammer.

Charged Up
Increases the number of Lightning Rod strikes by 2 and its range by 25%.

After 1 second, deal 475 (+4.75% per level) damage to enemies within a long line. The cooldown is reduced by 30 seconds for every enemy Hero hit.

Push enemies away, and slow their Movement Speed by 40% decaying over 4 seconds.

Aerie Gusts
Reduces the activation time for Tailwind from 6 to 3 seconds, and increases the Movement Speed bonus from 15% to 25%.

Call of the Wildhammer
Hinterland Blast has double the range and deals 25% more damage.

Wind Tunnel
Mighty Gust creates a wind tunnel for 4 seconds. Enemies caught in the tunnel will periodically be pushed back.

Nexus Frenzy
Increases Attack Speed by 20% and Attack Range by 1.1.

Epic Mount
Reduce the cooldown of Flight by 50 seconds, reduce the cast time before flying to 0.5 seconds, and increase the speed by 50%. 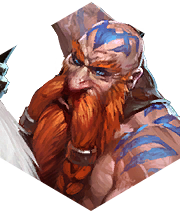