A Tank who is proficient against melee Physical Attackers, slowing them.

Once the crown prince of Lordaeron, and protégé of Uther the Lightbringer, Arthas was corrupted by the cursed blade Frostmourne in a bid to save his people. Now he rules over the damned as the Lich King and all shall know his wrath.

Deals damage to a target or heal Arthas

Root and damage enemies in an area

Damage and slow nearby enemies. Drains Mana while active

Army of the Dead

Deals 230 (+4% per level) damage and Slows enemies by 60% for 4 seconds. Also disables Minions, Mercenaries, Monsters and Structures for 20 seconds.

Activate to empower the next attack and restore Mana on hit

Sacrifice a Ghoul to heal

The next basic attack deals 99 (+4% per level) increased damage and restores 30 Mana.

❗Reward: After Rooting 10 Heroes, Howling Blast's range is increased by 20%.

Eternal Hunger
❗Quest: Use Frostmourne Hungers on an enemy Hero.

Rime
Every 5 seconds, gain 75 Physical Armor against the next enemy Hero Basic Attack, reducing the damage taken by 75%. Stores up to 3 charges.

Deathlord
Increase the range of Death Coil by 30%, reduce its cooldown by 3 seconds, and if Death Coil is used on an enemy Hero, its Mana cost is refunded.

Icy Talons
Gain 3% Attack Speed for 1.5 seconds every time a Hero is damaged by Frozen Tempest, to a maximum of 60%.

Immortal Coil
Gain the healing effect of Death Coil even when used on enemies. If Death Coil is used on Arthas, it heals for an additional 50% bonus healing.

Rune Tap
Every 3rd Basic Attack heals Arthas for 5% of his max Health.

Activate to gain 25 Armor, reducing damage taken by 25%, and reduce the duration of Stuns, Slows, and Roots against Arthas by 75% for 3 seconds.

Army of the Dead

Deals 230 (+4% per level) damage and Slows enemies by 60% for 4 seconds. Also disables Minions, Mercenaries, Monsters and Structures for 20 seconds.

Shattered Armor
Enemy Heroes hit by Howling Blast have their Armor reduced by 15 for 4 seconds.

Biting Cold
Each second an enemy is damaged by Frozen Tempest, it deals 12.5% bonus damage, up to a 50% bonus.

Remorseless Winter
Enemy Heroes that remain within Frozen Tempest for 3 seconds are Rooted for 1.25 seconds. This effect can only happen once every 10 seconds.

Frostmourne Feeds
Increases the amount of Basic Attacks empowered by Frostmourne Hungers to 2.

Absolute Zero
Sindragosa flies twice as far. Enemy Heroes are Rooted for 2.5 seconds, and then Slowed by 60% for 4 seconds.

Activate to make Arthas immune to Spell Damage for 4 seconds and heal Arthas for 25% of the damage prevented. 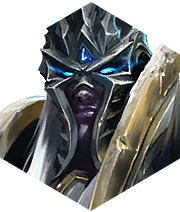